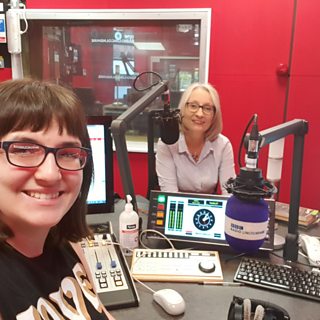 My last post was all about The Storyteller - the interactive story-writing show on BBC Radio
Lincolnshire that I've been involved with.

Back in July I was interviewed on the show by fantastic presented, Ella Wydrzynska, and the first chapter of the story - written by me - was read out.

Since then, five more great authors have featured on the show, and each has added their own amazing twist to the story with a new chapter. There will be ten in total and in a moment of madness, I've agreed to write the last chapter and try to tie everything together -  it's going to be quite a challenge as the story has gone inter-galactic (literally!)

If you'd like to listen to the story so far, you can find all the chapters here.

It's impossible to summarise . .  The adventure starts out  with our main character, twelve year old James, in the sewers beneath Lincoln, but soon involves an inter-galactic band of talking animal super-heroes including Frank the Tracker Badger,  Trevor the Crocodile and Gerald the Mouse, who are fighting an an evil pan-dimensional being who is trying to destroy our world (as a school project), James's friends Freya and Jayden, a race to find three magical rings, being trapped in a video game . .

You can have your say about what should happen next by listening on Sunday afternoons at 2pm and texting in your suggestions. Just don't come up with anything TOO crazy, otherwise I'll have to deal with it in my final chapter . . . who am I kidding? Feel free to come up with the craziest thing you can think of . . .
Posted by Helen at 13:14