Long journeys are the perfect excuse for some serious daydreaming. Plotting a dastardly crime, figuring out clever clues, cooking up some funny dialogue . . . that's what keeps me occupied as I gaze vacantly out of the window at the scenery,  especially when I have a brand new Adventure Island mystery shaping up (don't worry, I'm talking about when I'm a passenger - if I'm driving I try to keep my head mostly in the real world!).

This morning I was on the coach to the airport after an idyllic week skiing with my family, happily plotting away, while admiring the spectacular mountain scenery whizzing past, when I noticed that the two girls sitting across the aisle from me were getting a bit bored and were checking the location of the nearest plastic bags in a manner that had travel sickness alert written all over it.


I know that feeling. Yuk central!  I've learned that I can usually avoid it by (1) never, ever looking down in a moving vehicle and (2) never travelling on an empty stomach. And I also know that the only cure (apart from getting out and walking - not an option with a plane to catch!) is to have something to think about - apart from that horrible lurching feeling (if - lucky you! - you've never suffered from travel sickness, imagine you've accidentally swallowed a live octopus and it's now trying to climb its way out . . .) So, I asked the girls if they'd like to help me with my new book by thinking of some interesting names for one of the characters - a princess, no less!

My new friends Freya and Lily were on the case straight away! They came up with some utterly fabulous princess names. In no time at all I had a page of my notebook full (writing horizontally in front of my nose - remember, never, ever look down!) and we were pulling up at the airport terminal. After queueing for hours we found we were all on the same plane. I was handed a note. Lily and Freya, now joined by their friends Aileen, Emma and Eleanor, had come up with a whole list of names. Here are some favourites. 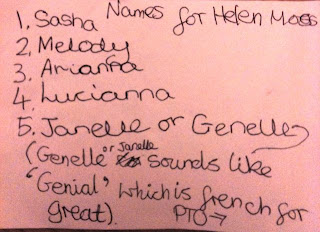 Thank you for your help, girls! So many names to choose from there. I hope the rest of your journey home went well (and that nobody needed the plastic bags!) and that you have a lovely Easter.

I'm afraid that the mystery princess won't appear until Book 11, which is not due to come out until Spring 2013, so you'll have rather a long wait to see which name she chooses (the characters in my books usually end up having a mind on their own and picking their own names!). In the meantime I hope you'll enjoy the other books in the series. I have a feeling you might like Book 2, The Mystery of the Midnight Ghost, which features an all-action film star with the glamourous name Savannah Shaw. 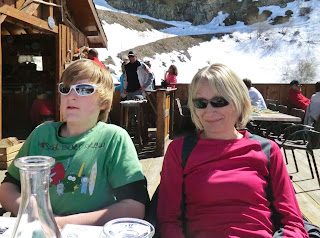 PS. With all this talk of princesses, don't panic, Adventure Island isn't suddenly going to turn all  romantic and fairy-taley! The Princess in Book 11 won't be wearing a spangly pink dress or a sparkly tiara - but she will play a part in a very baffling - and dangerous - new case for Jack, Scott, Emily and Drift.