When Dinosaurs Ruled My World 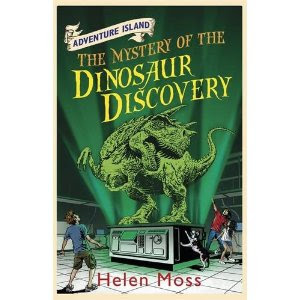 There's something of a dinosaur theme in the air this week. Last night I was lucky enough to go along to the Orion Publishing Authors' Party - a gorgeously glamorous affair, held in the central hall of the Natural History Museum in London, where we gathered in the shadow of the gargantuan - and beautifully illuminated - diplodocus. And this morning, the programme for the children's section of the Cambridge Wordfest Literary Festival was published on-line - featuring my workshop, Dinosaur Detectives - the subject matter chosen to tie in with the appearance in April of Book 7 of the Adventure Island series (The Mystery of the Dinosaur Discovery). I can't tell you how thrilled I am to be part of the fabulous Wordfest line-up!


All this dino-mania is just fine with me!  As far as I'm concerned you can never have too many dinosaurs.

As the mother of two sons, I soon learned that there were certain core requirements for the job. I  had to be able to craft a paper plane out of a napkin in under ten seconds, recite the names and key character traits of all the trains in Thomas the Tank Engine, construct an obstacle course, fortress and spaceship using nothing more than furniture and cardboard boxes, and classify on demand any given dinosaur by species, habitat and fighting skills at five hundred paces.

The dinosaur part was the most important by far, as there was a serious dinosaur obsession in our house: we had dinosaur books, dinosaur videos (Jurassic Park, The Land Before Time, Dinosaur, Walking with Dinosaurs...although I drew the line at Barney!) dinosaur Top Trumps, dinosaur jigsaws, dinosaur pyjamas, and, of course, hundreds of plastic dinosaur models.

For years, I couldn't leave the house without a stegosaurus in my handbag.

Now my sons are teenagers and dino-fever is a distant memory. These days, I'm expected to  earn my stripes in other ways: by having a working knowledge of the offside rule, remembering the release date of Mass Effect 3 for the Xbox (March 9th, in case you were wondering), and providing a round-the-clock free taxi service to name but a few.

But I still hanker after simpler days, when dinosaurs ruled my world.

Which is why it was such a treat to revisit my old friend, the Natural History Museum diplodocus last night, star of so many happy museum trips of yesteryear - even though this time the conversation was of books and authors and writing, rather than whether  two velociraptors plus a mutant dimetrodon working together could take down a T-Rex, and I was clutching a glass of champagne and a prawn canapé rather than a sticky little toddler hand and a plastic triceratops.

And it's also why I can't wait to share my love of all-things-dinosaur with an audience of children at at the Wordfest workshop in April. I just hope those kids are as excited as mine were to find out which dinosaur has the coolest name (pachycephalosaurus*, of course!) and exactly what coprolite** is made of. 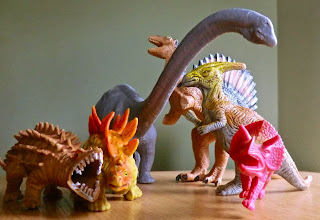 If you too fancy yourself as a bit of a dinosaur nerd, test yourself with this line-up of plastic models (found gathering dust in an old toy box) Match the dinosaur to its name: