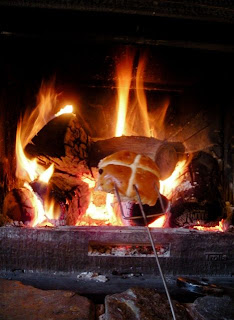 Last week our village was hit by a series of power cuts. Each evening the lights would go out for a short while. The duration of the outages increased little by little until by Thursday we were in darkness for several hours.

I've always loved power cuts. I love sitting by the fire reading by candlelight,  boiling pans of water for tea and toasting anything remotely toastable over the flames. I love carrying a candle to light my way up the stairs, shielding the guttering flame like a character in a Victorian novel (why, oh why, don't I have a long white nightgown to change into on these occasions?) In our house, there's always a groan of disappointment when all the gadgets beep back into life and the lights flicker on to dazzle our dark-adapted eyes.


On the first day of the power cuts the village school was closed. A surge of electricity had fried the circuits on the security alarm and nobody could get in. I imagined the parents all cursing, sending texts, making calls, rapidly re-juggling their work and other plans for the day (my boys are at secondary school now, so not affected by the incident!). But I knew that at the same time, the children would be cheering - oblivious to the logistical nightmares being played out around them - just jubilant at the prospect of a bonus day off school - like a snow day without the snow! What could be better?

All the power cuts and the school closure got me thinking about the Winter of Discontent**. Not the quote from Richard III, but the winter of 1978-1979, when the United Kingdom was beset by industrial action on a massive scale - striking lorry drivers weren't delivering supplies, bin men weren't collecting rubbish, health workers were only treating emergency cases, even gravediggers downed tools.

It must have been a terrible time for everyone affected by all that disruption - and for the workers and their families. But I was fourteen in 1978. With my sky-high wedge heels heels, maxi skirt, kohl eyeliner and curly perm*, I thought I was the the epitome of grown-up sophistication. But I was still a kid!  I didn't even notice the rotting piles of uncollected rubbish. All those strikes meant to me was lots of extra days off school because the heating fuel hadn't been delivered (yippee!) and lots of lovely power cuts (pass the teacakes!)


Which all went to remind me just how different the world can be when seen through the eyes of a child or teenager versus the eyes of an adult.

Our electricity supply has been sorted out now but I'm going to keep power cuts in mind as a kind of mantra as I embark on a monster re-write of The Sea Cucumber's Revenge. Beth, the protagonist, is fourteen (although she is smart and resourceful and far less concerned about eye-liner than I was at that age).  I have to be vigilant as I write from her point of view, that I'm always looking at the world through the eyes of teenage girl (and, even more importantly, through the eyes of potential readers, who are likely to be eleven or twelve rather than fourteen).   Remember the power cuts! Remember the Winter of Discontent! I will admonish myself every time I'm in danger of slipping back into the mindset of a middle-aged Mum.

* I suppose things might be very different in these perm-free days. Now that straight hair is in fashion,  fourteen-year old girls are dealt a cruel blow in a power cut as they can't plug in their hair-straighteners. Actually, I don't know why I'm pretending that it's only teenagers who have this problem. I'm lost without my straighteners too - which is why I have a back-up set fuelled by some kind of gas cylinder device - which my family (all male) affectionately refer to as my flame-thrower.

** For anyone young enough not to remember the winter of 1978-79, some aspects are recreated in the film The Iron Lady.  Meryl Streep is mesmerising as Margaret Thatcher.