Why I Love Being A Writer (Part 2) 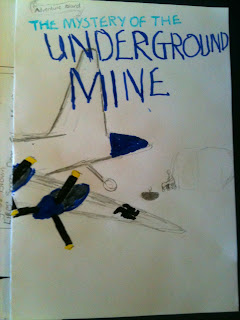 "What's this?" I hear you ask! "More  Adventure Island books coming out so soon? These sound brilliant! When will they be in the shops?"

I only wish I HAD created these amazing stories, but I have to confess they're not mine. They are all the work of the incredibly talented, hard-working and generally awesome Year Six pupils at Holywell Primary School near St. Ives.


I spent the day at this lovely school last week - one of the friendliest, most welcoming schools I've been lucky enough to visit - really full of energy and the buzz of learning - and set the children the mission of writing a new Adventure Island book - a mission they sportingly accepted, even though we worked out that to write 30,000 words in five hours would mean a hundred words a minute! So we settled on coming up with a story plan, a first chapter and a cover design in a day instead - which is still a pretty tall order!

Here are some more of the amazing stories; 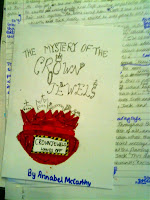 I know I've missed a few here! There were even more brilliant titles than this. Tell me which ones, I've missed, Year Six, and I'll add them to the list.

There were so many ideas flying around we didn't get chance to finish the book covers off, so I'm hoping Year Six will be sending me pictures of the finished articles soon and I will add them to this page.

In the morning I talked to the KS2 assembly. They were fantastically attentive listeners and also had all sorts of interesting observations and questions. When I talked about the ingredients for a mystery story I showed a picture of some well-known arch-baddies: a rather unsavoury line-up including Voldemort, Blofeld from the Bond films (complete with his white cat) and The Big Bad Wolf.
Why, one of the pupils asked, were all the baddies on my picture MALE? What a good question! I'd never noticed before, and nobody had ever pointed it out.

Of course, I do have some lady baddies in the Adventure Island books (Bianca Mendez, in The Mystery of the Missing Masterpiece, for example, is not someone you'd want to meet on a dark night!), but it led us on to a fascinating discussion, trying to think of all the female baddies we've met in books. We came up with:

Who have I missed? In the interest of equal opportunities, do let me know who you think are the best (or worse, depending on how you look at it!) female baddies in literature?

Thank you to everyone at Holywell Primary - head, class teachers, teaching assistants, dinner ladies and, of course, pupils, for making me so welcome in your school! 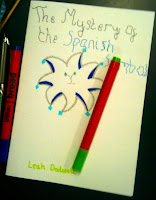 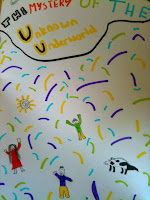