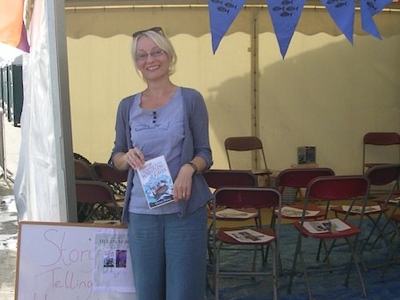 Never mind Hay or Edinburgh or even Cannes: Newlyn Fish Festival is where it’s at! OK, so perhaps not the obvious literary venue for my first public reading...but, the Adventure Island series is set in Cornwall, after all...

So I reported for duty to the Fish Tales story-tellers tent, clutching a handful of notes and copies of the books and feeling very nervous. Would anyone turn up? Would the tent be full of adults expecting a stand-up routine or folk singer rather than a children’s author? Would any children yawn, cry or sneak out the back? In the end I needn’t have worried.

The audiences were small - it was a lovely sunny day and there were so many other fun things to do at the festival(*) that not many ventured to the tent at the back of the ice works -  but the families who did come to the two sessions were wonderful. Everyone listened attentively, smiled in the right places, and was kind enough to say nice things and buy some books. One lovely family even bought the full set of all six (including the one copy of Book Six I had with me to read from, complete with my crossings out where I’d abridged a passage slightly for the reading!).


Thank you very much to George and Tom and to your mum and dad, for being the best first audience I could have wished for.

What an absolute thrill it was to read from my books while real people actually listened!

I read the passage from The Mystery of The Vanishing Skeleton, in which Jack has to escape from a fire in the ice works through the window.


And by extraordinary good fortune, the story tent was pitched right next door the very ice works - just the one I used as a source for the one in the book. I was able to tell the children. “If you look up as you leave the tent you’ll see the very window that Jack is hanging out of in this picture!

When I was writing Book 6, my sister Jane, who lives in Newlyn -  and is my unofficial roving reporter and researcher in Cornwall - sent me lots of photos of the Cornish Ice ice works from all angles, and quizzed local fishermen about its operation. Hence, The Vanishing Skeleton is dedicated to her - ‘with thanks for Operation Ice Works’

So when we first saw the location of the story tent, we jumped up in down in delight, as if we’d discovered a jewel-encrusted chateau filled with chocolate truffles. ‘It’s next to the ice works!” we exclaimed.  There were puzzled looks all round as we proceeded to photograph a rather ordinary empty tent and the side of the not-terribly-photogenic-ice-works.

Thank you to Angela Stoner for organising the Fish Tales tent and inviting me to take part. Angela has written a beautiful picture book called Once in a Blue Moon: A Mermaid’s Tale. I was delighted to have my copy signed. It’ll be winging its way to our little niece and nephew in Thailand soon.

Thank you again, to Jane, not only for Operation Ice Works, but for Operation Fish Festival and Operation Fun Family Get-together-in-Cornwall. Thank you to Will for being Number One Assistant and to Mac for the very special fish memento, and to Mac and Paul for taking photos.

(*) Lots of other things to do at the festival - apart from amazing displays of fish and cookery demonstrations (how could I complete with The Big Fish Filleting Challenge?) , there were stalls selling fun things like these Cornish pastyche bookmarks. (I just had to buy a set - they’re almost as cool as the Adventure Island bookmarks!) 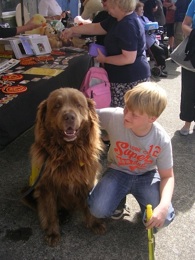 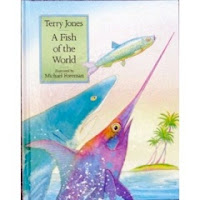 And then there was Bilbo the lifeguard dog. Who wouldn’t fall in love with this guy - a massive Newfoundland Water dog. He has webbed feet and saves people by swimming out to them with a float on a long lead. I could hardly drag Will away. Two things I know for sure. (1) Will is going to ask for a Newfoundland puppy for Christmas, and (2) Drift would love to recruit Bilbo to the Canine Division!

And finally, I was trying to think of an example of a children’s book with a fishy theme, and I remembered the fabulous A Fish of the World by Terry Jones (yes, the one from Monty Python) beautifully illustrated by Michael Foreman. The herring hero meets a rather unfortunate end which could be a bit upsetting for readers of a sensitive disposition, but my boys (who are not!) loved it. It’s one of the select band of  picture books that has  survived all the bookshelf clearances and now rubs shoulders with Malorie Blackman and George Orwell!